For the past few weeks, I’ve been writing about the sexual abuse I experienced in my childhood and sharing how it marked me as a target for other predators.

But it did so much more than that.

– It set me up with a life-long fear of rejection.

– It left me with deep feelings of worthlessness.

– It caused me to question the motives of others, never fully trusting their intentions.

– It made me hyper-vigilant to protect myself by trying to control the world around me.

And until recently, I wouldn’t have pinpointed these struggles to be related to that abuse.

I knew I had issues, but who doesn’t… right?

I’m learning that these beliefs and behaviors were birthed as a result of my abusive encounter when I was 4 years old. It’s my ground zero.

It makes sense, though. I’ve been a mess most of my life.

Slow to forgive and unwilling to forget.

But God is healing those wounds and untangling my self-esteem from the wrong places.

Interestingly, the physical part of my abuse has been much easier to work through than the deep emotional effects it left behind.

Because of those hateful words spoken over me by my abuser… “This is your fault. If you tell anybody, you will be in trouble. You are bad and dirty and will never be worth… anything.” …  I walked away from that apartment with a new belief system.

And then the Enemy went to work, anchoring the message of worthlessness to my self-esteem. 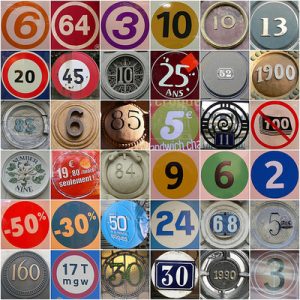 One of the tools he used was … NUMBERS.

And news flash… numbers are everywhere!

Numbers themselves are not evil. They help us make sense of our world because they define, differentiate, and describe the things around us.

We have social security numbers, employee ID numbers, and license plates numbers. When we fly, we’re a row and seat number. At a restaurant, we are a table number. Our clothes have numbers. Our home address is a number. We can be reached by a phone number. Our health is determined by a series of numbers (height, weight, etc).  We even celebrate numbers – birthdays, anniversaries, years sober, and years cancer-free.

Numbers are not bad.

But the Enemy used them against me.

I literally began to count my worth. And no matter how hard I crunched the numbers, they just never added up to me being “good enough.”

Here’s how that played out:

– When the number on the scale was higher than the day before… I felt ugly.

– When the size of my clothes didn’t match the world’s definition of attractive… it meant I wasn’t.

– When my number of friends, followers or likes on social media dropped… it told me I wasn’t likable.

… I used numbers to measure my worth.

But hold the phone. Chances are you have a number, too.

Which one makes you feel ugly? What number says you’re not good enough? Or that you’ll never be lovable? What number has the power to destroy how you feel about yourself?

Yeah, I thought so.

And I am sorry.

I don’t know about you, but I’m so done with the kind of math that leaves me feeling worthless. Because honestly, I will never add up to the world’s standard of acceptable.

Trying to measure up will always deplete my self-esteem – our self-esteem – because the world only offers performance-based love and acceptance. To them, the size of your jeans… the amount of money you have… the address of your neighborhood… the amount of Facebook friends or twitter followers you have… measures your value.

But to God, we aren’t measured. Instead, we are treasured.

“You only are a people holy to God, your God; God chose you out of all the people on Earth as his cherished personal treasure.” (Deuteronomy 14:2)

YOU are God’s personal treasure.

We will never be good enough.

What if we decided to focus on the only number that accurately determines our value. The number… One.  The One.

Reality Check: We all have a number. What’s yours?

Using the popular “Who is God to Me” and “Because of Jesus” printables as the cover… spiral-bound prayer JOURNALS are available now.

Previous Post: « The mark that told others… I was an easy target.
Next Post: Who Am I? :: finding your identity in motherhood »