Last week I mustered up my courage to publicly share an incident of sexual abuse that happened to me when I was four years old.

Thank you for your words of encouragement and support.

I discovered that so many of you can relate… and that broke my heart. But I also know that removing those stories of abuse from hidden places and bringing them into the light helps take the shame and guilt away.

Because Jesus is in the light.

He is the Light.

And He came to heal the brokenhearted.

If we’re honest… we’d learn that all of us have been heartsick, and have felt His peace and His restoration bleed into a situation, change a destructive behavior, or replace a negative thought-pattern.

It’s in those times that God confirms He is who He says He is… and will do what He says He will do.

Oh how He loves us…

Through my process of healing, God has opened my eyes to so many truths and lies about me… about Him… about life… about faith… about others.

It’s been a humbling experience. Freeing at times and painful in others. 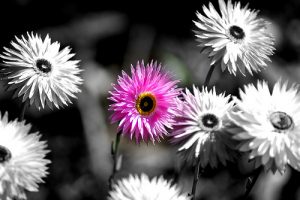 But few have caught me off guard like this one did.

Not only did that abusive encounter as a young girl set me up with a life-long struggle with worthlessness and feelings of deep rejection… but it marked me.

I had an invisible mark on me that only abusers could see.

It told them I’d been hurt before… and I was vulnerable enough to be hurt again. I was an easy target.

You see, that sexual abuse at age four wasn’t the only abuse I encountered. Instead it was the first of many where men took advantage me.

Somehow, predators could spot me a mile away.

In Mary DeMuth’s book, Thin Places, she talks about The Mark she carried from her sexual abuse as a little girl. Get this book. Her memoir is real and raw and bold… and I found a deep connection to her story. You might, too.

The Bible also talks about marks.

In Genesis 4:15, Cain was afraid for his life when God judged him for murdering his brother Abel.  God put a mark on Cain to help protect him from others, but it didn’t prevent him from being attacked or killed. The mark merely warned that anyone who murdered Cain would suffer a worse death.

The Book of Revelation says that as the redeemed, we bear a mark… a seal… on our foreheads showing we belong to God (Revelation 14:1). But it doesn’t exempt us from all earthly suffering. Instead, it shows that God has claimed us and we have eternal life with Him.

But the Enemy also marks people because he counterfeits the things of God. “It forces everyone—the small and great, the rich and poor, the free and slaves—to have a mark put on their right hand or on their forehead.” Revelation 13:16. It’s the mark of the beast.

When I kept finding myself in abusive, hurtful situations, I used to wonder… “Why me?”

Why am I always the target of abuse? Was it something I did? Something I said? Did I invite it? Was it my fault? Was I at the wrong place at the wrong time?

And then the older I got, I started asking God… “Why are You letting this happen? If You really “love” Your kids so much, why are You allowing this?!”

A victim mentality started growing, and the message of worthlessness dug in deeper. I was riddled with shame and guilt and anger… which manifested through control issues and struggles to trust the motives of others (mostly men).

… Am I speaking anybody’s language?

Oh I just wanted to be normal!

I envied my friends who seemed to have these charmed lives filled with laughter and hope and confidence.

And then there was me… marked… and keeping secrets about how very broken I was inside.

I carried most of it alone, sparing my friends and family the details and incidents.

What would they think of me?

What does God think of me?

Isaiah 55:8-9 tells us that we don’t think like God does. We can’t understand His thoughts or ways. So, I may never know why God allowed those things to happen to me.

But I do know that His plan is – and always has been – for me to thrive. And Jesus died on the cross to prove it.

And so I am thriving… now.

Once I began to trust Jesus for healing, the mark that had attracted predators for most of my life… went away. It simply disappeared.

And most of the time, I believe it.

Most of the time, I walk in that truth.

But sometimes I fall on my face, asking God to once again remind me who I am… and who I am not.

And He does. Every. Time.

New spiral-bound JOURNALS to keep your prayers and thoughts in one place – available now.