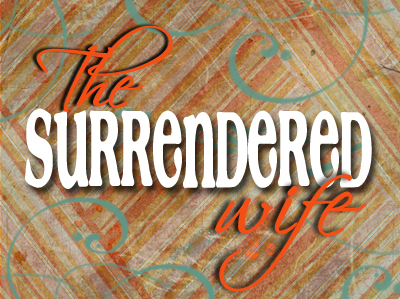 How are you doing in your quest to become a surrendered wife?

Can I be completely honest with you?  THIS.  IS.  HARD.

And the Enemy is turning up the heat, making it even more difficult for me to walk this out… well.  Just when I want to throw in the towel and throw this new plan out the door… I think about you.

It means a lot that we are journeying together.

And I’m glad, because today’s topic is painful.

For us to surrender to our husbands, we have to give up control.

While being in control worked well in my single life, I knew it was becoming an issue in my marriage when I started feeling overwhelmed and exhausted from carrying all the responsibility.  Most of it was self-imposed, which then led to resentment that I had to handle it all.

I began to look at myself as superior, and Wayne as… inferior.

In my mind, I was the only capable adult in the marriage.  (not reality)

I stopped trusting in his ability to do things on his own, so I felt obligated to control it all so the outcome was what I wanted.

But I realized there was something more under that desire to control. There was a much bigger issue.

The fear of things not going my way drove me to control… and manipulate… and monitor.

I’d remind him of his appointments in advance.

I’d leave detailed notes on how to do things for the kids.

Ugh… really.  I can be so nasty in my flesh.

When we treat our husbands as inferior… when we take control out of fear… when we make all the decisions… they become dependent on us.

They get beat down, thinking they “can’t” do things right.

Rather than share their ideas and desires, they default to what we think and want.

And eventually… they stop thinking for themselves altogether.

In the book The Surrendered Wife, the author talks about the importance of respecting our husband’s thinking.  He needs our vote of confidence.

Because when we think for him, or make him feel as if his thoughts are silly… damaging things can happen:

These aren’t conducive to a happy husband or a thriving marriage.

So we need to learn how to speak life into them by showing we respect their thinking.  The author suggests saying this exact phrase – word for word – to your husband to show him that you respect his ideas and suggestions.

While it may sound fake at first, ask God to back up your words with genuine surrender.  This 3-word phrase is power-packed for your man because it implies that you agree with him.

It makes him feel valuable to the marriage and family.

He feels respected, which I discussed in my last blog.

He needs you to believe in him!

And when it ends up that his decision or idea fails… because at some point it will… remember that he’s learning.  He is building up a muscle that has atrophied.

So… don’t make a big deal about it.

Instead of the “I told you so’s” or the “I knew you couldn’t do it right” comments, you give him a hug.  Chances are you’ve made bad decisions and had good-intentioned ideas fail, too.  Yes?

Listen… when your husband knows he has grace to fail, he will take more initiative.

And the amazing by-product of giving up control is that when he feels respected by you and better about himself, he’ll begin to treasure you more.

So… no more reloading the dishwasher because he’s done it wrong.

Stop reminding him how to take care of the kids.

Quit telling him the best roads to drive to church.

No need to tell him – again – to take his vitamins.

Let him chose how he wants to dress.

Don’t nag him to exercise.

Remember that he’s an adult, and a capable one at that.

And to be honest, the only way to know who your husband really is… is to let him lead.  Because when you do, you’re allowing him to step into the role God designed for him.

Being a surrendered wife means empowering your husband to be the man in the marriage.  You step back from being in the driver’s seat.  You trust his ideas and decisions.

You accept that just because his way isn’t your way… doesn’t mean it’s the wrong way.

What area will be the hardest for you to give up control?

Father, thank You for creating my husband to lead.  Forgive me for sometimes standing in the way of Your design. I want to be the kind of wife that encourages and trusts her husband.  I want to be full of grace for failed attempts.  I want our marriage to blossom.  Help me step back and help him step forward.  I speak against the spirit of Fear that causes me to control things.  By the blood of Jesus, I cancel its assignment and ask that You bring the spirit of Peace and Trust to rest on me and my home.  Please bless my marriage.  In Jesus’ name.  Amen.

REALITY CHECK:  Under the need to control your husband lies a fear of something.  Ask God to reveal it.  Then ask God to heal it.

Check out my “Be Real” acrostic printable!  Free thru January!

Concept taken from The Surrendered Wife