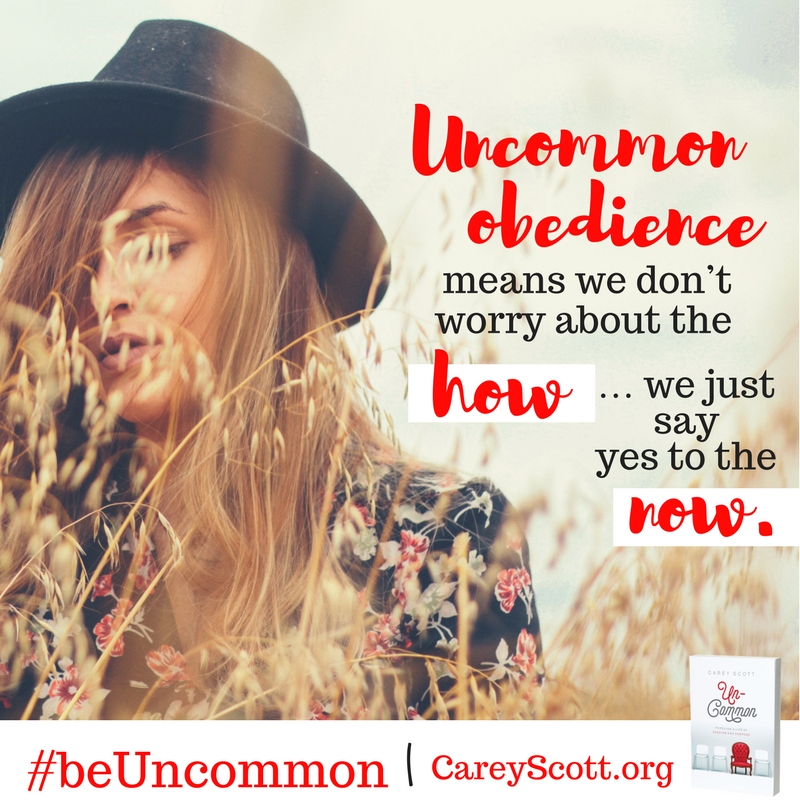 Blogging opens up the doorway to mean-spirited comments. While most respond to your words kindly, there are others who use the screen as a hiding place and leave comments that can cut to the core. And when I started writing a series on marriage, I had no idea people could be so cruel.

Let me back up a little.

My husband and I found ourselves in another tough “season” and sought counseling to help us work through it. Honestly, I don’t like counseling. Without fail, it reminds me that I’m not all that and a bag of chips. I discover the places where I’m the issue when I could have sworn it was all his fault. I mean, who really wants to pay money to hear all that? Amen?

But I’ve learned wise counsel is not only worth the time, money and effort… it’s often necessary to help us navigate rough patches in life.

And just as I expected, the counselor looked at me and said, “Carey, we need to address your control tendencies.” Me. Again. She suggested I take a step back so my husband would have room to step up and lead.

Of course I wanted to scream choice words and throw things in her direction, but I knew she was right. Truth is I was a control-freak, something I learned as a coping mechanism because of childhood abuse. And since my husband grew up in a home where mom ruled the roost, letting me take the lead felt familiar.

But it was backfiring on me. And it was destroying us.

So as I began to make changes in my marriage, a friend suggested I write about it on my blog. Even more, I felt God prompt me to share—real time—about my experiences. I decided that if I was struggling with control, others probably were too. And so a blog post turned into a series.

That’s when the hateful comments began to surface.

The people that spoke up were convinced I was advocating for wives to be submissive and quiet—insinuating their voices weren’t important. That their role was to shut up and do whatever their husband wanted them to do—just like a doormat.

They obviously don’t know me. At all. Because that’s nowhere close to what I believe.

And almost every time I posted a new part of my journey, they were quick to make more rude and mean-spirited comments. Everything in me wanted to stop writing about it. I wanted to quit!

Trying to tame my control-freak tendencies was hard work, and sharing the messiness of that journey was even harder. I didn’t need their hateful words. Nor did I deserve them.

But God had asked me to open up and share with my blog audience. And I had a choice to make: give up or stand up.

As women, sometimes when we face big opposition it stirs up even bigger emotions. And rather than push through, we want to quit.

… Fear of rejection sets in.

… We begin to lose confidence or conviction, and the people-pleaser in us rises up.

… We battle shame, questioning if we are qualified to speak out and wondering if what we have to say even matters.

… We worry about how we’ll do what needs to be done.

And then we run into Luke 6:46. “So why do you call me ‘Lord’ when you won’t obey me” (TLB)? Gulp. And we realize that part of being uncommon is choosing to obey God… even when it’s hard and uncomfortable.

What is God asking you to do that feels too big?

Where is He asking you to move forward even though the opposition looks insurmountable?

Are you paralyzed by insecurities and afraid to take the next step?

Here’s what I know:

Uncommon women stand up for what is right. And obeying God is always the right thing to do.

Well I continued to blog each step of my journey to become less of a control freak in my marriage. It’s wasn’t always pretty, but it was real. And when the hateful comments showed up—because they kept coming—I didn’t let them stop me from doing what God had asked.

I continued to say yes to God.

Listen up friends… If we want to live differently than the world so others see Him because of our words and actions, then being willing to do what God asks of us is vital. We don’t need to worry about the how. We just need to say yes to the now.

And the good news is that God will bless both.

So no matter what… in every situation… even when you’re unsure or scared… even when everything in you wants to quit… choose to obey God.

Previous Post: « How to find hope in the hard places
Next Post: How to hold on to joy… no matter what’s trying to beat you down »