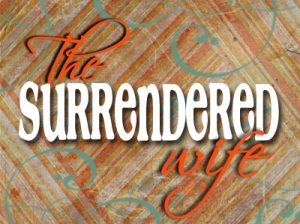 I’m going to let you in on a little secret:  I’m married to a very strong woman.

In fact, it’s really no secret at all to those of you who know Carey.

Or to those of you who read her posts.

Or have heard her speak.

Or have stood in line behind her at Walmart.

I love her strength. I’m proud of her drive. Her ability to organize and run our household has always amazed me.  For years I was convinced that the meaning of the name Carey was “One who makes lists.”

Our personalities are very different – I’m more laid back, more improvisational than Carey.  When we got married, we fell right into the same roles I saw modeled by my own parents, and for about a dozen years… I was more than happy to follow her lead.

That worked for a time. At least it seemed like it did.

But under the surface, neither one of us was truly happy with the arrangement. It bred resentment in each of us. And it kept us from becoming the people God wants us to be.

Recently, we’ve had a huge breakthrough in our marriage.

I went through some counseling that helped me want to be more of a leader – in all areas of my life, not just at home.

But… change can’t come in a marriage without both the husband and wife being bought into it.

A husband can’t lead if his wife isn’t willing to follow.

And neither role is easy when you aren’t used to it.

It’s much easier to fall back into old patterns than it is to stick with new ones.  Yet somehow, we’ve managed it much more successfully than I could have dreamed we would.

I didn’t believe that me taking the lead was miraculously causing Carey to step back from her traditional role in our marriage, but I hadn’t a clue why she was.

But those of you who read her blog know the answer, don’t you.

You see, about the same time I was going through my counseling, Carey started a blog series about “The Surrendered Wife.”

I had no idea what this was, because Carey asked me not to read her posts on the subject, and I faithfully honored her request. It wasn’t until a few days ago that she let me in on the general idea; that she is making a concerted, intentional effort to step back and allow me to lead.

How have I seen this play out in our marriage?

I recently took over paying our bills.

Turns out it’s a lot more complex than it was when I was a single guy. And with this new-fangled computer thing called “Bill Pay,” figuring out when to pay what was like trying to choreograph a Broadway musical.

Within three weeks of taking over our finances, we’d had to pull a good chunk of change from the line of credit we have with our bank.

But that’s not what happened at all.

When I told Carey about the overdraft protection kicking in, she was supportive and affirming. She told me not to worry about it, that it would take some time for me to get used to juggling everything just as it had for her.

I can’t tell you how great that felt.

What I can tell you is that I don’t feel like a child anymore.

Carey is able to step back. She no longer has to remember everything, and instead of raising three kids (one of whom will turn 49 this year), she’s only raising two now.

She doesn’t have to remind me of every little thing… and I’m stepping up and getting things done.  And when I do screw up, Carey doesn’t belittle.  She encourages.

She used to always remind me about trash day. But now she doesn’t.  And when she left for work the other day, she saw that the trashcan was already at the curb.

Don’t get me wrong.  Just because this change has been miraculous doesn’t mean it’s been… easy.

Giving birth is a miracle, but it’s painful. Isn’t it worth it, though?  Yes, I know – I’m a man and I will never know that level of pain, I get it.  It’s a metaphor.

But in this case, we’re both giving birth.

Sometimes our frustrations come out at each other sideways.

We have our crunchy moments.

But… we try to remember that God designed roles for each of us.

We make sacrifices for the other, and we keep pushing forward… even when it gets hard and frustrating.

And each day, the new clothes God has asked us to wear feel a bit more familiar… a little more comfortable.

I’m sure things haven’t been going smoothly for all of you who are trying to step back and let your husband lead. He might not be handling things well, and you might be struggling to keep from falling back into your old patterns.

But I encourage you to stay the course.

I hope hearing how things are going in our marriage… from the husband’s perspective… has been an encouragement to you.  While it’s not an easy change to make, it’s a good one.

Ladies… this is good.

Keep in mind that what God asks of us is usually difficult, and trying, and testing.

Conversely, the World encourages us to take the easy path. But with the divorce rate hovering somewhere over 50 percent, I have one question for the World – “How’s that working out for you?”

REALITY CHECK:  Stay the course in your efforts to surrender… even when it gets a little crunchy.

Check out my “Who God is to Me” – alphabet of God printable!  Free thru February!